It’s 12.30 pm on a Friday and I’m about to join a couple of hundred ordinary people expressing the same tone as the ringing Extinction Rebellion message, nurture our planet now, by any means necessary’.

As much as the tone is unanimous, anyone would call this a group only this is a true democracy as there’s no qualifying criteria for joining besides peace, love and a desire for a sustainable planet – fair enough.

Until now, the unfunded, democratically controlled group of protestors have grown faster than any corporation could; even without seed capital, marketing campaigns, and the financial abilty to penetrate a specific demographic with accuracy. No, this is a simple voluntary organisation running on empathy and necessity. A world community that extends far and wide like a fire, Amsterdam, Berlin, London, New York, Sydney, and so on.

One needs to take note and recognise the irony of such a situation where the general public affords growing support to aid the outstanding reach of an unsponsored cause. This was the one factor that turned my head, as I looked for Mother nature, God, the Universal Spirit, or whatever title we need to summon that attractive force of nurture into existence as a global alarm clock.

In all types of corporate, political and social interaction there are many things that we may have opposing views on; such issues go into many convoluted points that appear to hold water. But, with issues such as this one, it almost begs those who object to show themselves. I see the classic scene from the movie ‘Spartacus’ only nobody dares to stand up.

Unless we have grand ideas of leaving the planet, like a burglar leaving a messy crime scene, it’s in every herbivore’s interest to specifically address what it will take to support this health food shop called earth. Why? So that we can continue returning to it – metempsychotically speaking. Any living thing that opposes this simple duty has to be considered an alien with, suicidal and megalomaniac qualities.

But at the foot of this human duty, there is a corporate body that turns it all into a slow labourious task. Let’s face it, it isn’t as though this is some fortune 500 corporation trying to force the government to build a tunnel under the sea, merely for trade, or a US conglomerate trying to incorporate GM seeds into the UK food chain at the risk of the public’s health.

We all know, even if we don’t care to admit it, that surviving the growing odds of being excorticated from this planet is by no means the same as a commercial venture and shouldn’t be treated as such. And because of the simple nature of XR, I’m sure my human family will agree when I say to those that don’t get it ‘we simply won’t let you make us extinct’ – It doesn’t get much clearer than that.

As silly and scary as it seems to those who see the irony, there are people holding power who don’t quite get this simple message and, fortunately for them, of course, we allow them a platform. You would think such a message of global survival would need no platform for debate but this is the odd planet that we have created and we respect all views. Such democracy for ignorance is part of our love for individuality even if, at times, it supports things beyond common sense. But let them speak, the most they can do is dig themselves deeper into their poo of excuses while the masses turn away to embrace the sweet new fragrance of truth.

Besides, I don’t think words can ever support a want for extinction but it would be entertaining to see how one would pose a vote on it, I say bring it on. 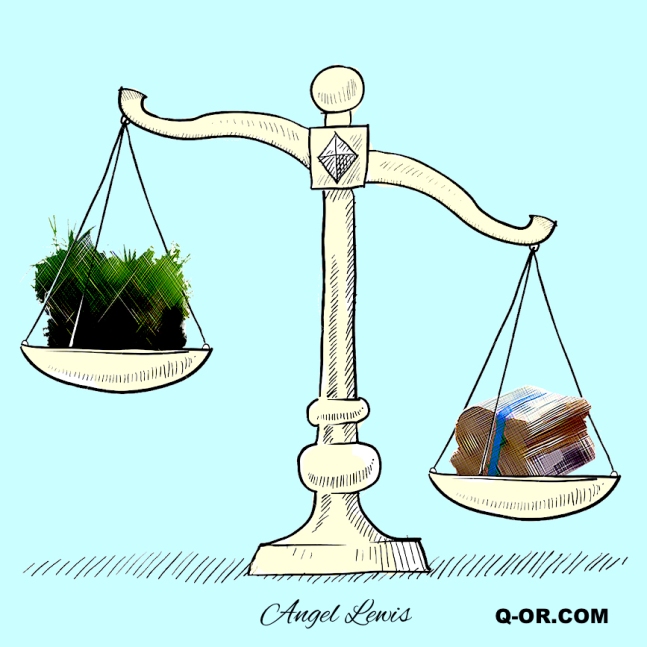 Needless to say, under all the media barf about the police pre-emptively seizing stored items for the Westminster rally and the comical assumption that there could be some danger to the public, with all the cushions, food and barriers seized, there is no greater danger than a Permian style mass extinction. Well, maybe not as large as the Permian one but if you are truly seeking the terrorist of terrorists you need look no further than the government’s resistance to human survival.

In reality, it appears that underlying all of this, there’s a reversal of roles going on, as what we are witnessing is nothing short of a world-historical event. The common people are becoming the government once again and it’s looking less and less as though the immediate interests of, legislation brandishing, Parliament is to prioritise human existence. Today we should be ashamed to have created and supported such a detached beast. Thus, in a macrocosmic way, it more than explains why this selfishness has trickled down to our urban, egoistic agendas but thankfully not today here, in the square. 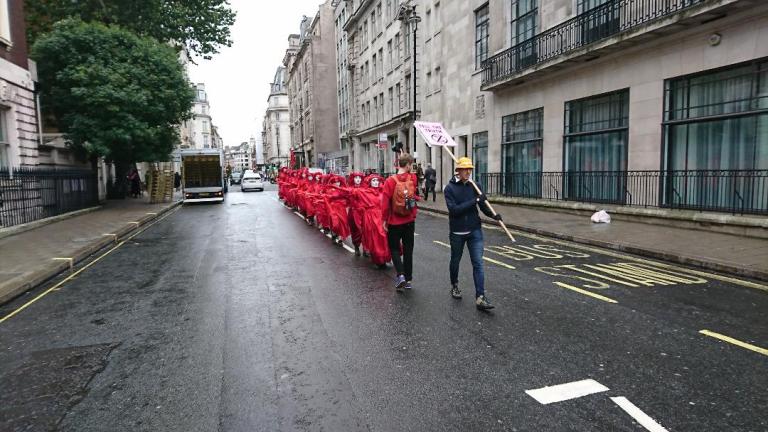 In the surrounding area, at the point of today’s sit-in demonstration at the BBC Broadcasting House, a poetic scene drifts past; these angels of extinction push the message of doom further into the public consciousness. The rainfall around Oxford Circus just appeared as props to the striking visual delight.

As with all demonstrations, an air of separation is mutually created between uniforms and non-uniforms. The sounds of sirens running up, through and around Oxford Circus could lead you to believe that there was a riot ensuing but the peaceful democratic approach of song, discussion, tears and dance created an environment of open communication rather than suspicious ambiguity.

Was there really a need for arrests? I stared into the faces of the gathered common people, with children weaving in and out of the smiling mothers and the obvious answer led to me questioning – the police’s view.

Being a lover of revolutionary flicks, ‘Fight Club’ jumps to the front of my mind. In a practical way, this work of art is superior to The Matrix, if you can see beyond the acting and consume the overall message that many have missed. I learned from this movie that a badge, a uniform and a hat do not relinquish the fact that there lives a human inside, operating the machine. If one can dissolve the separation within their own mind they may be able to appeal to an actual human and thus immediate change follows – a crane does not operate itself, yet.

Two police officers were my point of concern. When they approached the podium thingy with demands that the two peacefully situated demonstrators come down from the ledge, that they were on, it seemed a strategic move to exhume an empty message of authorised power but I wondered if the executive branch themselves had been penetrated by the real message of Extinction Rebellion.

I asked a woman in climbing gear whether she was a climber or a police officer, to which she affirmed that she was ‘…with the police’. After her joking about the positive impact of the media covering arrests would have on the (media-fed) viewers and her ‘just doing a job’, I asked if she would join the cause on her day off. To that, she replied ‘Maybe my daughter will’. That seemed like a safe non-committed agreement and a decent compromise considering her role of controlling the resistance. Although it is very much her issue as well, the point remains and maybe every demonstrator should first acknowledge the human behind the badge. It may take a while but with some empathetic interaction with humans regardless of their suit, eventually there may be more support in this area; after all, those who claim to be in charge are simply people that don a suit. They’re not that dissimilar to the Joker behind the mask in Batman. I dunno, maybe emotional insecurities, bullying, lead to the confusion of loyalty but we still all have a conscious duty to look at the human behind the mask as a fellow albeit a disillusioned one, with all their strange reasoning. 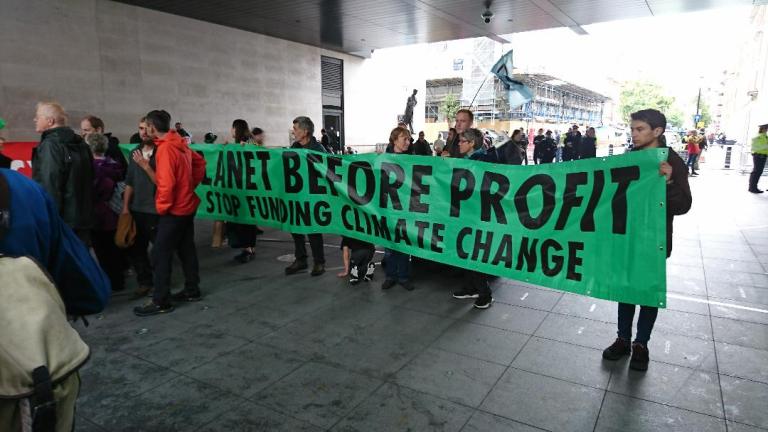 It seems apparent that our strategy-led culture endures seeking to expunge anything that looks remotely truthful and disruptive to capitalism, through its media. But for me, an overwhelming sea of grey hair in an urban setting is all the proof I need to see the legitimacy of a matter. This certainly isn’t a teenage trend that we’ll look back at (horrified) in the future; it’s more accurately the exposure of facts in order to ensure our survival, this we will surely be more than proud of being part of in the future.

Extinction Rebellion is made up of young voices of vision as well as old voices of wisdom, children, men and best of all an overwhelming amount of women’s voices, that sounds pretty all-inclusive to me.  And as for the many bloggers who wish to use this essential platform to gain Youtube likes with no respect for the damage they do to a very real situation, you’re merely providing the public with a peep into the future to witness media desperation by any means necessary on the lowest level: humanitarian thoughts reversed. With all the unwarranted resistance to a simple plan to live we have to travel back in history to see at what point common sense became uncommon in government and why money today has no conscience nor care for tomorrow. 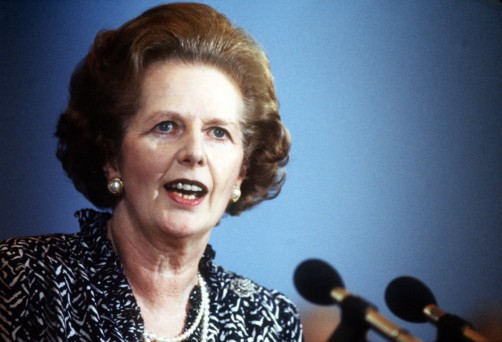