First of all, as a writer, the last people to see you and acknowledge your work are typically friends and family. Yep, It takes a mind open wider than ‘O Grand Canyon’ for friends to know just how important it is to detach, become impartial and pay extra special attention to the artistic expression of your own peeps. Others are lucky enough to enjoy a feeling of blind support from their peers, so this may not be their experience, (be thankful) but in the hurried world that we’ve created where nobody has time to be in your moment this is a more than usual occurrence. What can you possibly know?

For an Artist, familiarity can be a niggling iron cage that places your hard work, thoughts and actions in a box, assumed to be nothing but the predictable ramblings of a sibling, a friend or a partner. This I call ONYA syndrome (Oh Not You Again). That means sadly that you are predictable. You cannot possibly have something substantial to express that we haven’t already seen or heard because obviously, we know your limitations.

True this may be in some cases but as often as it is not, the surprise of genius expressions from somebody inside the community says much about how different two paths really are even while walking side by side?  Things are seen through separate eyes, no matter how close you think you may be. If one can refrain from expressing this local prejudice it may allow an opening of the eyes to see the possible jewel right at your feet. It also feeds an awareness of the potent value right before you and saves the redundant act of searching the world for that thing that is only contained within each one of us. Beauty is found in the eye of the self.  The Alchemist by Paulo Coelho comes to mind.

Being at the other end of this peculiar brotherly suppression of sapience also opens your eyes to the damage of peer prejudice. It’s as though because you came up from amongst the group you shouldn’t possess anything of value exclusive to the group. Much to the demise of poor Jesus, who was of the people yet met a sudden end at the hands of those same peers that he tried to reach, while they refused to see past plain old Jesus from the block.

You would be surprised what the guy right next to you may know. When I completed my book ‘Brush’ I presented it firstly to my family and friends. It was read front to back by …oh maybe one or two people like Laura Borland and Ishmahil Blagrove who, not only read my book but, sent me comments that lead to deeper thoughts and exchanges between us. But I often wonder how and why they saw the work much less respected it. Was it an obligation, were they also aware of this peer prejudice or just genuinely interested in the work? Either way, they saw me. 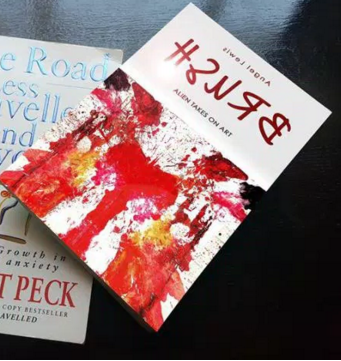 The work
The real work is to understand that inspiration is realised within, behind the backs and without the eyes of even your closest peers, then to be able to (secretly) translate these golden non-tangible droplets of the heavens into 3-dimensional earthly sense. If you fail to do this the very best you can expect is to be labelled with the noble title of (I bow) ‘Eccentric’ and at worst: be boxed as cuckoo. Me, I will accept any of these titles and degrees of outstanding achievement because once you leave the plane of human language and your expression can no longer squeeze into those tight skinny genes called human you will have to walk a path of loneliness, left with only divinity as your insurance policy.  That deserves a medal because rather than stay within the realms of safe and palatable the initiate has a requirement to be as honest as possible and this almost always means to become  vulnerable.

One would agree to call themselves a writer in as much as the limitations of language permits this label but one would more accurately be considered to be ‘A Bridge’. A writer can use the cerebrum to string soulless words together in a chain of proven methods to communicate a point. A point born from the left hemisphere pregnant with agenda’s (yuk). This can be done most effectively with extensive training and research.

But then just writing is not always the gift. The true gift within authorship is becoming a bridge. Now before going deeper into this, you have to recognise that if there is such an average person today they would naturally perceive through only five senses, therefore anything beyond this, stepping into realms of clairvoyance is rarely understood. Well, how can it be without awareness of perception beyond the five senses? So before we introduce the reader to our cuckoo land we just STOP and translate into the modern hieroglyph called words. Like altering a molecule’s state from steam back into water, we appeal to what every 3-dimensional being trusts in-Science.

In this way it is easier for most to perceive written expression knowing that the writer must get into peaceful enough surroundings to allow the appropriate serene environment to inspire the mind, activating past conscious experiences to organise in a creative order to express adequate sentences forming the information to share. It would be of benefit to understand the job of a bridge is different.

A broad experience of various extremes with heightened empathy allows an opening of the soul’s gates in each person.  Once the experiences are so vast and considerate, you form as an empath and at this point, you are granted pure information as long as you remain open.

You can also feel beyond the known senses. This also means it’s no longer necessary to have to read to gain information, your sensitivity is that much more heightened that you can be reached by any method other than words. But as mentioned before ‘The work’ is translating this data into palatable sounds and symbols for the 3-dimensional mind to understand without you being considered a crackpot.

In the image above Tehuti, (Thoth) hands the gift of internal sight witnessed by the Bull. I would be surprised if most are not aware of old Tehuti (Hermes) and him representing writing, speed, translation and Mercury – the planet of speed. What may escape the mind is him placing the eye, which is not an eye of the known senses, on the bull, symbolic of the throat chakra. (sound, vibration, expression). This is the way and method that information from the cosmos rains down on us and even though it is often misinterpreted by those in close proximity, once it has formed, as it is from beyond space and time,  it may lay dormant until the receiver has given up her physical form and moved on to another embodiment.